As long as there is enough strength in these hands to reach out to those who come to her, to place her hand on a crying person’s shoulder, Amma will continue to give darshan, to lovingly caress people, to console and wipe their tears until the end of this mortal frame – this is Amma’s wish. 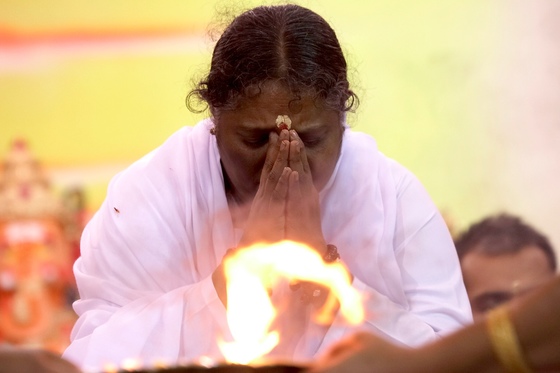 For our inaugural profile we have chosen a quite obvious and visible humanitarian. She may not be someone you have heard of but we think you will find her amazing. Amma, or “Mother,” a sixty-something woman from India, lights the world one hug at a time. Referred to by the popular press as “The Hugging Saint,” Amma does not claim herself to be a saint. She considers herself a person who reaches out to the poor and suffering regardless of religion or nation or circumstance. And she reaches out quite literally: with a hug. Amma has hugged more than 34 million people in the last 35 years! Most of her days are spent traveling the globe to receive people into her arms. “Embracing the World” is Amma’s unique mission. By giving blessings to multitudes she is trying to raise the vibration of this world to one of love.

Some years ago I went to see Amma with a few friends. I didn’t know what to expect from her hug but I was curious and I love partaking of spiritual traditions from the East. We waited patiently for hours, transported by the upbeat atmosphere of music, textiles, and food offerings. When my turn came I was led by attendants who first freshened Amma’s garments and then gently nudged me toward her arms. To my surprise and delight, my hug was truly extraordinary, otherworldly, soul-satisfying!

Amma performs “darshan,” which means “blessings” with her loving hugs. She is the universal, archetypal mother. And we get to be the universal baby in her arms. She embraces – not just a quick hug – and she continually smiles for twenty hours a day seven days a week, all year long. Hers is an example of tireless, devoted service. When I was in her arms she was singing in my ear. It sounded like ”mama ma maaa….mmm ma ma ma.” And I heard myself cooing back like a baby. I couldn’t believe it! I felt myself let go of resistance in my body and my mind and just melt into her embrace. It was like a duet– a give and take– a spontaneous affection. I gave her my love as she gave me hers. I was utterly astonished and grateful to have had this real experience with her!

Mata Amritanandamayi was born in a remote coastal village in Kerala, South India in 1953. As Amma became more known in India and beyond she inspired and founded an impressive network of charities including hospitals, schools, orphanages, free housing programs. Her foundation made the largest contribution to the 2004 Tsunami disaster relief and was a generous donor to the Bush-Clinton Katrina Fund. Today, many thousands of people live at Amma’s ashram in India and she is beloved by millions around the world.

Amma’s central mission is the eradication of poverty. She is concerned with two types of poverty. One is the scarcity of food and shelter and clothing and the other is the lack of love and compassion in people’s lives. More than a billion people suffer lives of crushing physical poverty on this earth. An untold number suffer the emotional impoverishment of loving and tenderness in their lives. Amma believes that it is poverty that causes most problems in this world. Poverty drives people to commit crimes, engage in prostitution, join terrorist movements, abuse substances, make war. She asks people to spend just one half an hour a day working in some way to assist those who suffer.

Here are inspiring quotes from Amma. This first one is in reference to the Tsunami disaster in her 2006 Interfaith Award acceptance speech from the Interfaith Center of New York:

[When] natural calamities occur, people’s hearts open up, transcending thoughts of caste, religion and politics…. Yet, the non-judgmental attitude and compassion people express during such situations come and go as quickly as a flash of lightening. If, instead, we can manage to keep that flame of compassion ablaze within, it can dispel the darkness surrounding us. In this way, may the trickle of compassion within us grow into a torrential flow. Let us transform that spark of love into an effulgence, blazing like the sun. This will create a heaven on earth. The capacity to do this dwells within all of us; it is our birthright and true nature.

The essence of motherhood is not restricted to women who have given birth; it is a principle inherent in both women and men. It is an attitude of the mind. It is love and that love is the very breath of life. The love of awakened motherhood is a love and compassion felt not only towards one’s own children, but towards all people, animals and plants, rocks and rivers – a love extended to all of nature, to all beings.

When asked, Amma says that her religion is LOVE.

We are sure you can now see why we chose Amma as a fitting person to be honored in our first PEOPLE WHO GLOW profile on Tenderness Rising. Watch this beautiful video of Amma sharing tenderness with her “children.”

Learn more about Amma and her charities

Watch Amma’s message about Covid-19 below.

And most important, following Amma’s ask of us, what can you do for 30 minutes a day to help alleviate suffering in this world? It’s not necessary to do it all at once. A cumulative effect of moments in a day can be powerful. Look for opportunities to tend to yourself, others, your community, the wider world!

Many years after my hug from Amma, Tom, a thirty something young man, came to me for therapy. He was anxious and in need of support in navigating conflicting interests between he and his two business partners. It was painful for him that the three of them couldn’t seem to get on the same page about how to grow their business. A conflict-avoidant person by nature, Tom just wanted everyone to “get along” and also have fun running their successful enterprise.

When Tom shared his personal history with me, I was amused and delighted to hear that as a newborn infant he had been placed in the loving embrace of Amma, the Hugging Saint. His mother, a 1960’s flower child and long-time devotee of Amma, regularly attended Amma’s USA events with her children. Over the years she also took them to visit Amma’s Ashram in India— including a visit while Tom was in treatment with me!

My work day brightened every time Tom would come to my office. Even though we had difficulties to discuss we always had a good time. It seemed that the plentiful hugs he received from Amma were still vibrating through him, clearing and cleansing all the energy fields in his wake. In all of my career I have never had a patient who was as open hearted and insightful about human emotions as this lovely young man. He was so without pretense. As we talked I was impressed at how he always seemed to know what his heart was feeling. He also demonstrated an empathic grasp of what  others were going through, even though, to his dismay he often couldn’t make it all better.

Tom mainly suffered with a disbelief that his business partners just didn’t “get it.” He also considered himself a caretaker type, so why couldn’t he just “fix it?” In our work he came to see how his caretaking was sometimes a liability—that it wasn’t possible to meet the needs of everyone perfectly, especially those two people.

Over the six months we worked together, Tom came to accept some hard realities and develop more objectivity.  It was more natural for him to be the “mother”  rather than to be the “baby,” but with effort he stopped trying to caretake everyone else’s needs and prioritize his own self-care. With these changes the business dynamics eventually did shift. The more combative partner, on his own, decided on taking a buyout from the other two. Though Tom never wished for the departure of the partner, he was relieved when the tensions dissolved. He was able to breathe more easily and go about his life again— lighting his path even more with glowing, Amma-inspired optimism.

Want to join the discussion?
Feel free to contribute!